Information At A Glance
Aero the Acro-Bat is a Super Nintendo game in the Platformer genre. The game was published by Sunsoft and developed by Iguana Entertainment. The game has an ESRB Rating of E (Everyone 6+) and was released on 1993-10-01. The game's official site can be found at www.sun-denshi.co.jp. 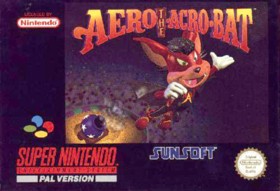 This is an old school platformer that originally came out in 1993. It featured very colourful graphics as well as catchy sound and starred a odd bat like creature who wore sunglasses :) Yup he is a cool dude!

This game features huge levels which allow you to go in any direction and has some very cool stunts. It is a fun platformer, but it does have some issues....

The main negative is the controls, they just feel very loose overall and unresponsive. The other problem with the game is that it can be difficult at times and for any modern day gamer the overall lack of a real story is a bummer :(.

Overall this game is pretty fun for a classic platformer..if only it had more development time it would have been a classic.

You should try this game out, as I recently played it on the wii via Virtual Console. Check it out :)